Be Wary of These 5 Weather Events This Fall 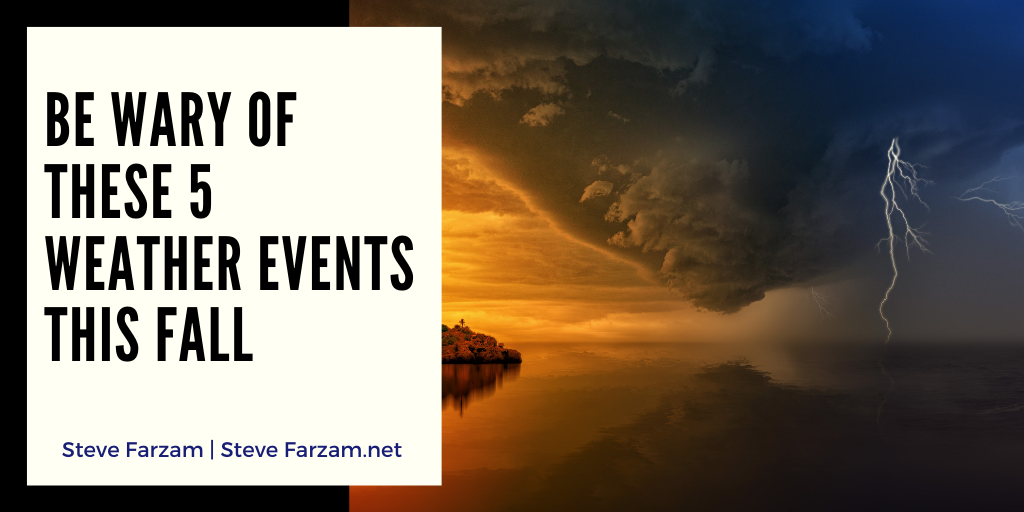 When thinking of extreme weather, it’s often incorrectly assumed that fall is a safe season sandwiched between summer and winter. However, people can be left unprepared if they’re not aware of the weather events that commonly occur during the season of pumpkins and crunchy leaves.

Your geographic region will dictate which events you should be especially wary of.

Because fall nights are longer and cooler, there is an increase in fog that typically develops overnight and lasts until mid-morning. While it doesn’t seem like a major weather event, it can be a hazard for travel. More than 28,500 vehicles crash in the U.S. each year, on average, due to fog, according to the Federal Highway Administration.

In addition to road hazards, fog also disrupts air travel, leading to delayed flights and inconvenienced travelers. We do see fog year-round, but it’s more common this time of year. Use caution and good judgment if you need to travel when road visibility is low.

During the fall, the clash between air masses can sometimes lead to severe thunderstorms. The phenomenon is stronger in the spring, but the changing season from summer to fall will still leave cold, dry air fighting against warm, humid air.

From October into November, people from the Plains to the Ohio Valley and Southeast should be especially vigilant. The severe weather can also affect the Northeast, but it is less likely because that area is farther removed from heat and humidity this time of year.

Atlantic hurricane season lasts from June through the end of November. It does peak in September, but there have been some late-season hurricanes that caused notorious damage, such as Hurricane Matthew. Tropical cyclones are still common this time of year because the ocean’s surface temperature remains warm enough for them to develop.

Winter is notorious for light, powdery snow, but snowfall during fall tends to be wet and heavy. Because there are typically still leaves on the trees, this puts more weight on them, making them more likely to fall or lose branches.

If you park under a tree and an autumn snowstorm is expected, it may be best to move your car. The branches may also damage homes or power lines and block roadways, leading to potential injury and travel delays.

The first frost of the year brings the growing season to an abrupt end for sensitive plants. Rural areas are most susceptible to early frosts, which can affect crops and agriculture.

If you live in an area that experiences these weather events, be vigilant and listen to your local weather forecast for updates.