Common Driving Injuries and How to Treat Them 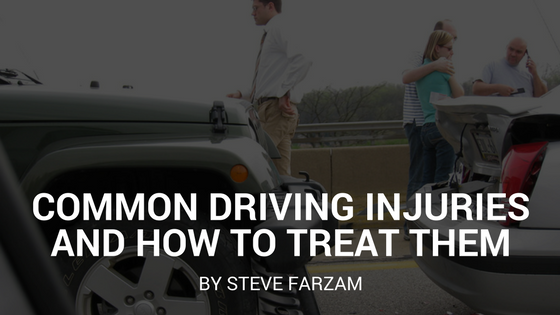 Americans spend an average of 290 hours per year driving on the more than four million miles of roads across the country. And although automakers continue to introduce new features that make cars an increasingly safe form of transportation, over two million people are still injured in car accidents annually. Nobody plans to be involved in a collision—that’s why we refer to them by the euphemism of “accidents”—but when it inevitably happens, preparation is critical in order to minimize damage and protect the safety of both passengers and drivers. Take a look at some of the most common injuries related to car accidents and how you can treat them.

During a car crash or accident, projectiles can fly around the interior as if the vehicle were a snow globe: think cell phones, broken glass, coffee mugs, books, laptops, and more. These objects pose a threat to anyone inside the car and often cause scrapes, cuts, and even serious lacerations. If they should occur, apply pressure to stop the bleeding, and clean the wound with soap and warm water. Lacerations may require stitches, which should be administered by a trained medical professional, but you can use standard bandages to cover less severe cuts.

Drivers are often knocked forward into the steering wheel during collisions, and this can cause chest trauma. The effects of such injuries can be as little as bruising on or around the chest, but they can also lead to difficulty breathing, broken ribs, and potentially even death. When treating collision victims for chest trauma, be careful with them and take care to immobilize their neck and back in order to prevent spinal injuries, and ensure they are in a safe location until professional help arrives. Monitor their breathing and perform CPR if they stop breathing. And whatever you do, do not remove any objects puncturing the chest, such as knives or needles.

Back and Spinal Injuries

These are some of the most dangerous injuries related to car accidents because they can lead to severe lasting damage like paralysis. As with chest injuries, immediately immobilize the neck and back so that the spine remains still and you do not bring about any further damage. Do not move the victim unless they remain in imminent danger where they are, and even then, do your best to keep the neck and back immobilized.

Of course, this is not an exhaustive list, and there are other injuries that can arise as the result of car accidents. In these and in other injury scenarios, however, the first step should always be to call 9-1-1 so that medical professionals can provide care to the victims. A key rule should always be that the scene is safe before getting involved.