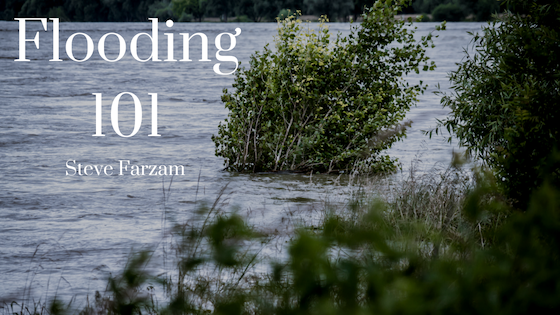 In every U.S. state and territory, the threat of a flood is a very real possibility, as is in any area of the world that receives rain. In the U.S. alone, more people die as a result of flooding than from tornadoes, hurricanes, or lightning. A flood constitutes as an overflowing of water onto land that is typically dry and can range from a few inches of water to levels that cover a house to the rooftop. They are the most common of all the weather-related natural disasters and can occur during heavy rains, when ocean waves break on shore, when snow melts too quickly, when sea levels rise, or when a levee or dam breaks. Floods can occur in a matter of hours or can last days, weeks, or more.

The most dangerous form of floods are flash floods. This is because they combine destructive power, incredible speed, and unpredictability. Flash floods typically happen when too much water fills an ordinarily dry creek or river bed alongside currently flowing creeks and rivers. The combination causes water to rise rapidly within a very short time frame, with little to no warning.

Areas that are densely populated run a higher risk of flash floods due to infrastructures, such as buildings, highways, parking lots, and driveways. The construction of these reduces the amount of rain that is absorbed by the ground and increases the potential for flooding. While cities more often than not have an abundance of storm drains that route streams underground, they can quickly become overwhelmed by heavy rain and flood nearby roads and buildings.

Along Rivers and Near Dams

Levees or embankments are often built alongside rivers to help prevent flooding on the bordering land when the water level rises. While these are used as a preventative measure, they can sometimes fail, leaving destruction in its wake. New Orleans experienced massive flooding after Hurricane Katrina in 2005 due to the failure of the levees built to protect the city.

When dams fail, the wall of water released is also incredibly devastating to the nearby area. A dam in Johnstown, Pennsylvania broke in 1889, releasing a nearly 40-foot wall of water that killed 2200 individuals within minutes.

The rapid runoff that mountains and steep hills produce results in stream water levels rising quickly. Since rocks and clay soils prevent most of the water to permeate the ground, this saturated soil can swiftly lead to flash flooding. Vacationers near streams or rivers in mountainous areas should take caution if there are thunderstorms in the area. A 6-inch deep creek may not seem that intimidating; however, it can quickly swell to a 10-foot river if a thunderstorm is in the area for an extended period.